MEDIA AND OTHER ARTICLES 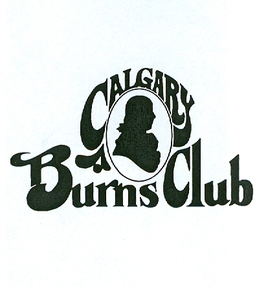 Please see a readable version of the article below the photographs. 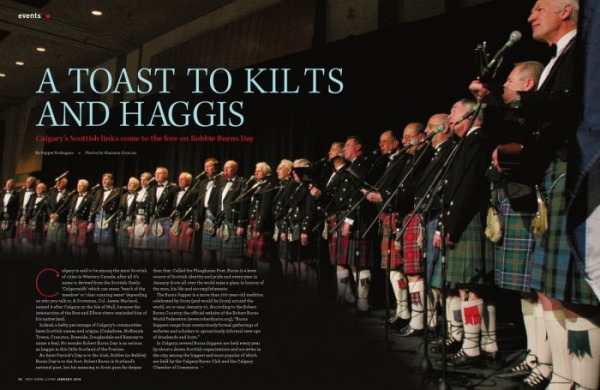 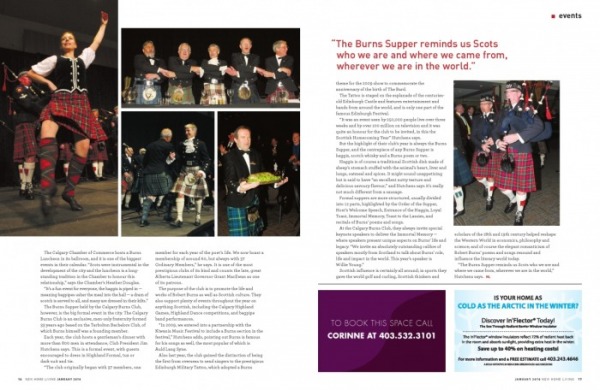 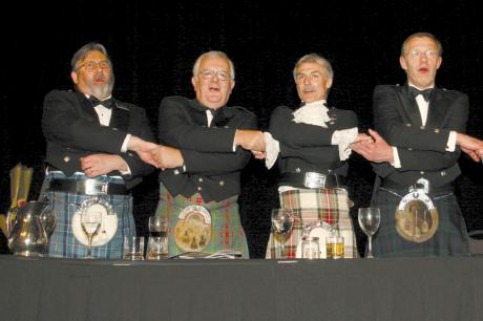 Calgary is said to be among the most Scottish of cities in Western Canada, after all it’s name is derived from the Scottish Gaelic ‘Calgarraidh’ which can mean ‘beach of the meadow’ or ‘clear running water’ depending on who you talk to. A Scotsman, Col. James Macleod, named it after Calgary on the Isle of Mull, because the intersection of the Bow and Elbow rivers reminded him of his native land.

Indeed a hefty percentage of Calgary’s communities have Scottish names and origins (Cedarbrae, McKenzie Towne, Cranston, Braeside, Douglasdale and Ramsay to name a few). No wonder Robert Burns Day is as serious as haggis in this little Scotland of the Prairies.

As Saint Patrick’s Day is to the Irish, Robbie (or Rabbie) Burns Day is to the Scot. Robert Burns is Scotland’s national poet, but his meaning to Scots goes far deeper than that. Called the Ploughman Poet, Burns is a keen source of Scottish identity and pride and every year in January Scots all over the world raise a glass in honour of the man, his life and accomplishments.

The Burns Supper is a more than 200-year-old tradition celebrated by Scots (and would be Scots) around the world, on or near January 25. According to the Robert Burns Country, the official website of the Robert Burns World Federation (http://www.robertburns.org), “Burns Suppers range from stentoriously formal gatherings of esthetes and scholars to uproariously informal rave-ups of drunkards and louts.”

In Calgary, several Burns Suppers are held every year by about a dozen Scottish organizations and societies in the city, among the biggest and most popular of which are held by the Calgary Burns Club and the Calgary Chamber of Commerce.

The Calgary Chamber of Commerce hosts a Burns Luncheon in its ballroom, and it is one of the biggest events in their calendar. “Scots were instrumental in the development of the city and the luncheon is a long-standing tradition in the Chamber to honour this relationship,” says the Chamber’s Heather Douglas.

“It’s a fun event for everyone, the haggis is piped in — meaning bagpipes usher the meal to the hall — and a dram of scotch is served to all and many are dressed in their kilts.”

The Burns Supper held by the Calgary Burns Club, however, is the big formal event in the city. The Calgary Burns Club is an exclusive, men-only fraternity formed 33 years ago based on the Tarbolton Bachelors Club, of which Burns himself was a founding member.

Each year, the club hosts a gentleman’s dinner with more than 800 men in attendance, Club President Jim Hutchens says. This is a formal event, with guests encouraged to dress in Highland Formal, tux or dark suit and tie.

“The club originally began with 37 members, one member for each year of the poet’s life. We now boast a membership of around 60, but always with 37 Ordinary Members,” he says. It is one of the most prestigious clubs of its kind and counts the late, great Alberta Lieutenant Governor Grant MacEwan as one of its patrons.

The purpose of the club is to promote the life and works of Robert Burns as well as Scottish culture. They also support plenty of events throughout the year on anything Scottish, including the Calgary Highland Games, Highland Dance competitions, and bagpipe band performances.

“In 2009, we entered into a partnership with the Kiwanis Music Festival to include a Burns section in the festival,” Hutchens adds, pointing out Burns is famous for his songs as well, the most popular of which is Auld Lang Syne.
But the highlight of their club’s year is always the Burns Supper, and the centrepiece of any Burns Supper is haggis, scotch whisky and a Burns poem or two.

Haggis is of course a traditional Scottish dish made of sheep’s stomach stuffed with the animal’s heart, liver and lungs, oatmeal and spices. It might sound unappetizing but is said to have “an excellent nutty texture and delicious savoury flavour,” and Hutchens says it’s really not much different from a sausage.

Formal suppers are more structured, usually divided into 12 parts, highlighted by the Order of the Supper, Host’s Welcome Speech, Entrance of the Haggis, Loyal Toast, Immortal Memory, Toast to the Lassies, and recitals of Burns’ poems and songs.

At the Calgary Burns Club, they always invite special keynote speakers to deliver the Immortal Memory — where speakers present unique aspects on Burns’ life and legacy. “We invite an absolutely outstanding calibre of speakers mostly from Scotland to talk about Burns’ role, life and impact in the world. This year’s speaker is Willie Young.”

Scottish influence is certainly all around; in sports they gave the world golf and curling, Scottish thinkers and scholars of the 18th and 19th century helped reshape the Western World in economics, philosophy and science; and of course the elegant romanticism of Robert Burns’ poems and songs resound and influence the literary world today.

“The Burns Supper reminds us Scots who we are and where we came from, wherever we are in the world,” Hutchens says.

Congratulations to David Hood on winning a 2009 Merit Award from the Canadian Association of Petroleum Landmen. 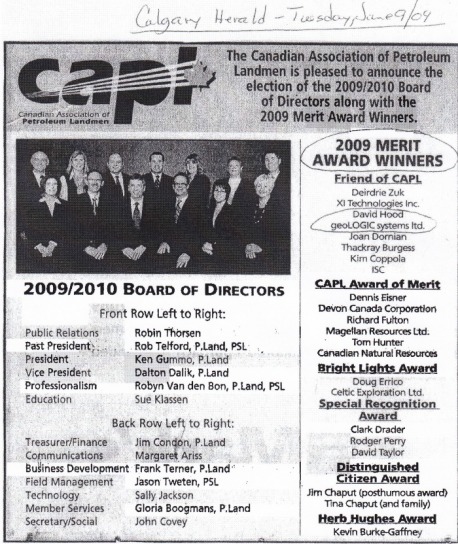 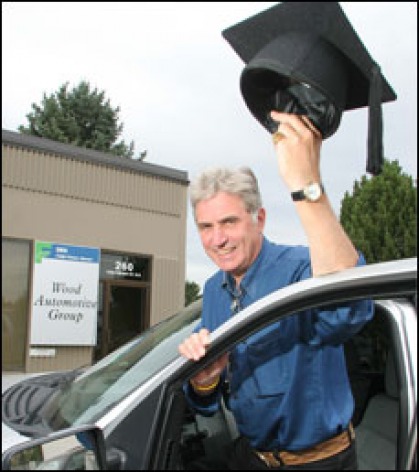 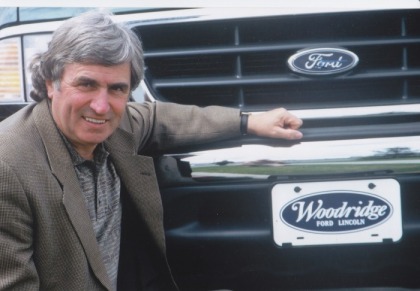 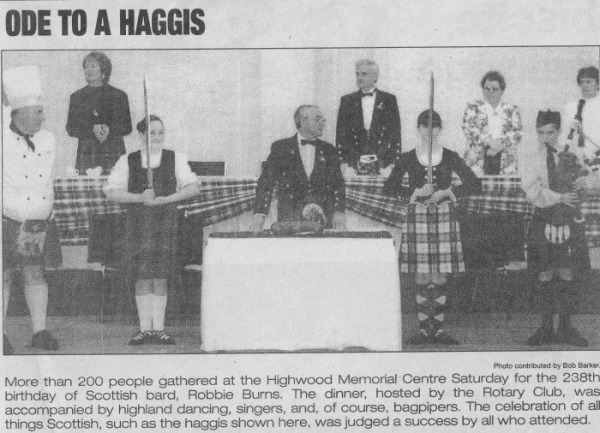 Bob Ferrier at the Rotary Club Burns Supper in the Highwood Memorial Centre.