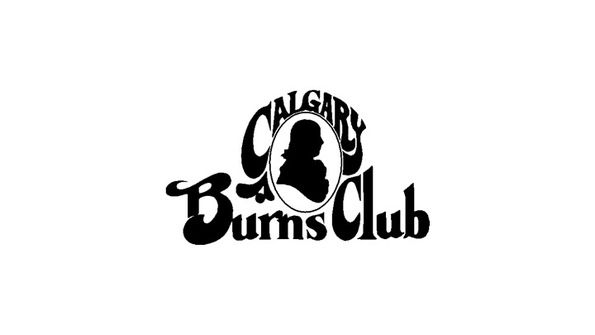 The Calgary Burns Club singers performed at the Edinburgh Tattoo from the 7th - 29th of August, 2009.

The CBC Singers on the Mini Tattoo Circuit at Linlithgow.  Photographs courtesy of Bert Thorne. 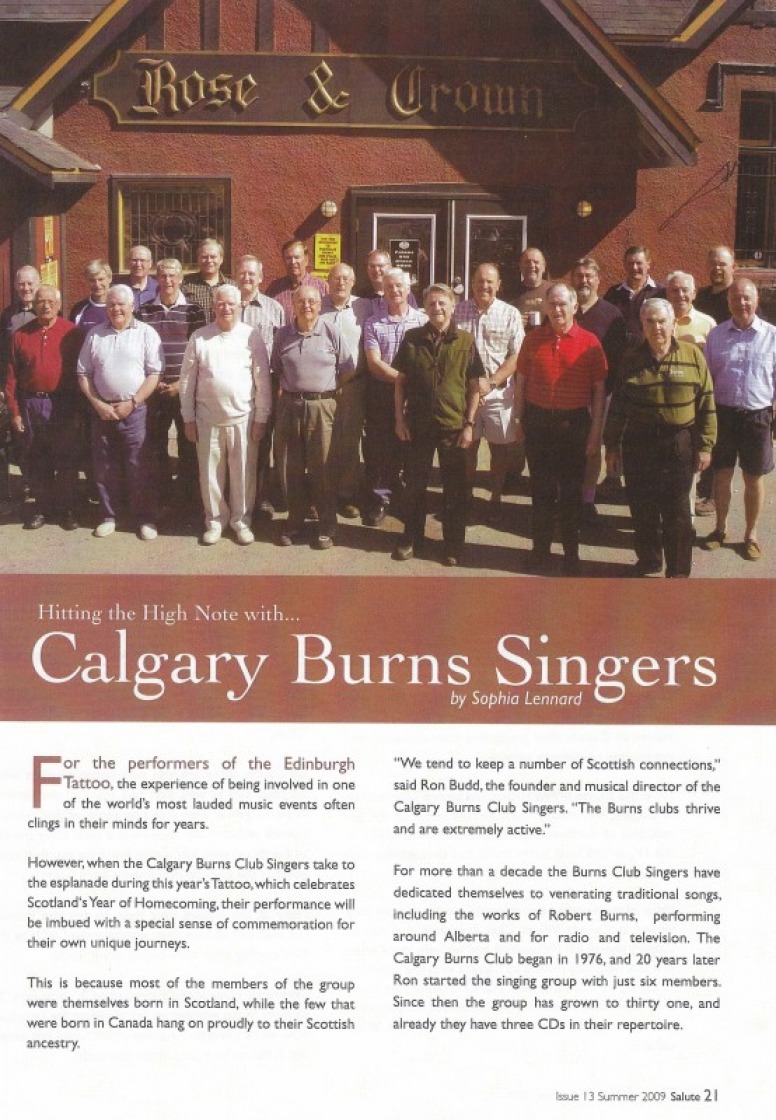 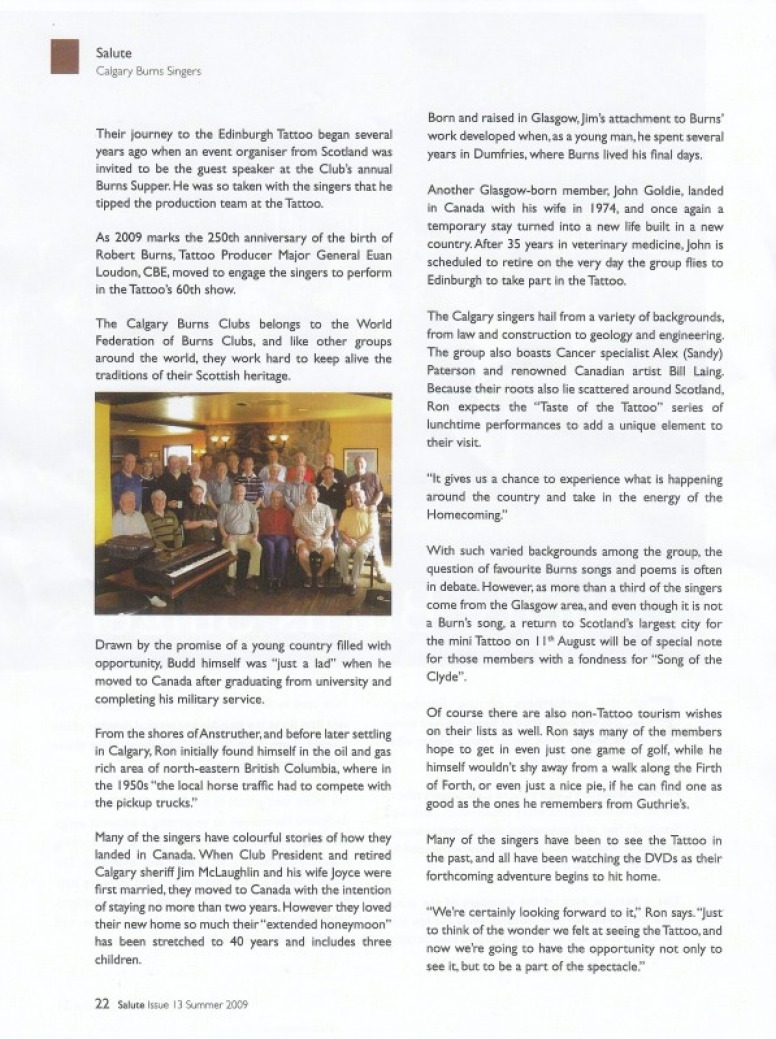 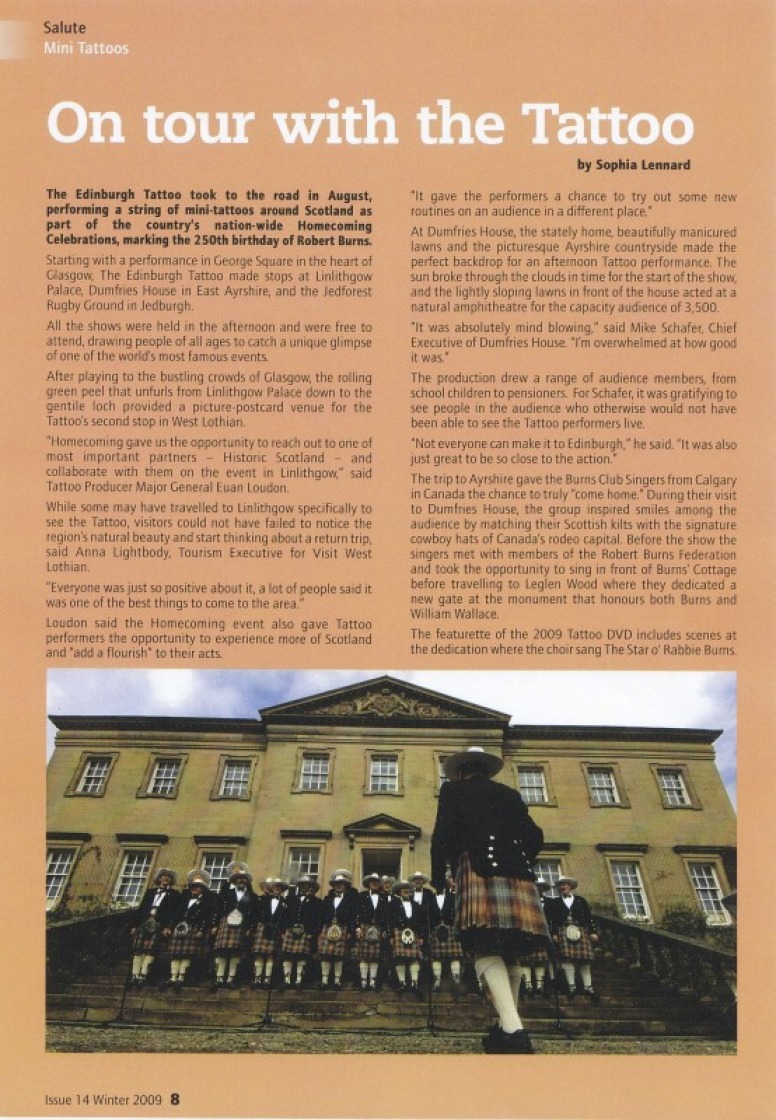 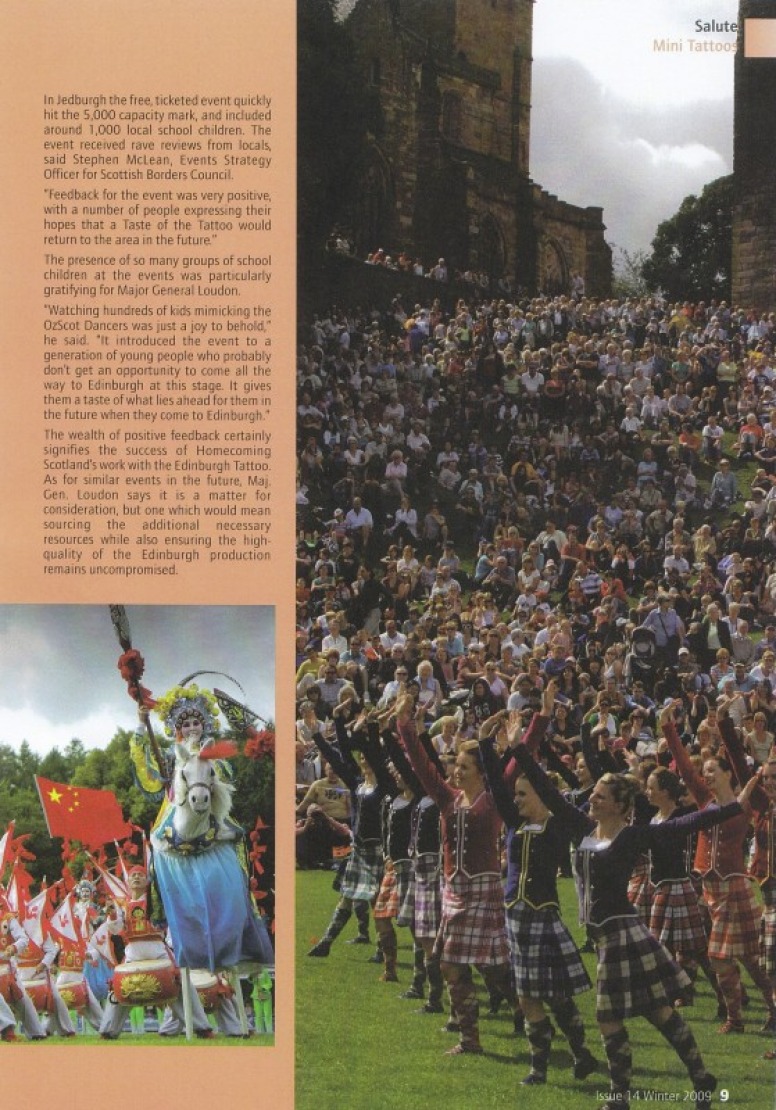 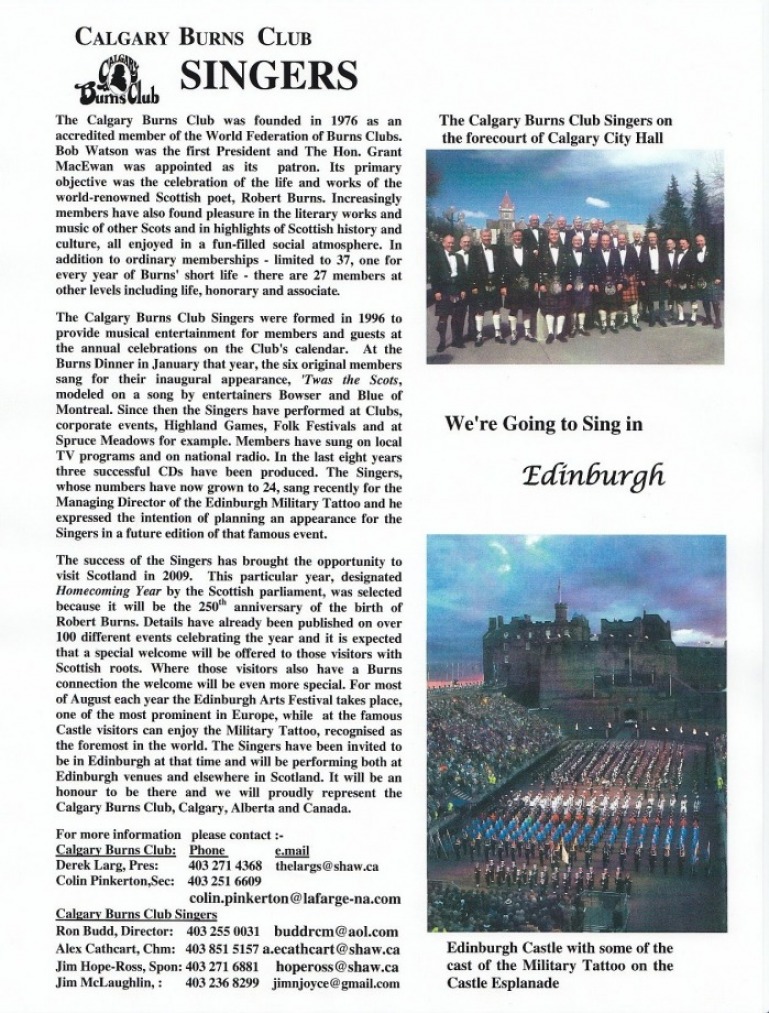 An excerpt from the Bridgeton Burns Club (Glasgow) website:

The 250th Anniversary of the birth of Robert Burns, Edinburgh Military Tattoo 2009 and Calgary Burns Club Singers from Alberta in Canada, all adds up to a spectacular show.

As the year of the Home Coming draws to a close, one highlight was the Edinburgh Military Tattoo 2009. The content included many references to Robert Burns, to both his works and his collection of songs.

Soloists Elysia Leech and Christopher Nairne were backed by the Calgary Burns Club Singers. The Mass Highland Dancers entertained with a display depicting Tam O’ Shanter. A whirlwind of colour as the scene at Kirk Alloway was re-enacted right up to the chase with Meg losing her tale.

The finale included Coming Through The Rye and the Star of Robbie Burns before the National Anthem and concluded with Auld Lang Syne.

The content and quality of these poems and songs along with the dancers and the Calgary Burns Club Singers made this years Edinburgh Military Tattoo much more emotional than in years before.

The Calgary Burns Club President Jim Hutchens said, "It was a privilege to be invited to appear at the 2009 Edinburgh Military Tattoo. We were representing Burns Clubs world wide and so very proud to do so."

The picture of the CBC Singers was taken at the Robert the Bruce Statue located near the Jubilee Auditorium in Alberta, a fitting back drop for such a fine group of men who share the common aim of celebrating the life and works of Robert Burns.

On a wispy and snowy Saturday morning, a boisterous cannon of song bellows from the second floor of a downtown tavern.

It's the sound of about 30 members from the Calgary Burns Club preparing for a performance in the world-renowned Edinburgh Military Tattoo in Scotland.

The club was invited to the affair to sing selected music this August from Scottish poet Robert Burns and considering last year's celebration was broadcast to about 100 million people around the globe there is much practice to be done.

The Tattoo, which refers to an 18th century military tradition and not permanent skin art, has been celebrated in Edinburgh since 1950 as part of the Edinburgh Arts Festival and is a deeply rooted tradition in Scottish culture.

"We're the only group that's appearing from Canada this year so not only are we representing Burns clubs from around the world, we're representing the city of Calgary and the country of Canada," says Derek Larg, president of the Calgary Burns Club.

"2009 is the 250th anniversary of Robert Burns' birth.  There's a big push to get the expats arount the world back to Scotland for the tattoo, and this has come together as one big festival. It's a huge thing."

Twenty-four out of the 30 members in the singing group are native Scots and the thought of performing in Burns' birthplace, in front of Edinburgh Castle and a live audience of over 220,000 have them doing their best to ensure they are pitch perfect. 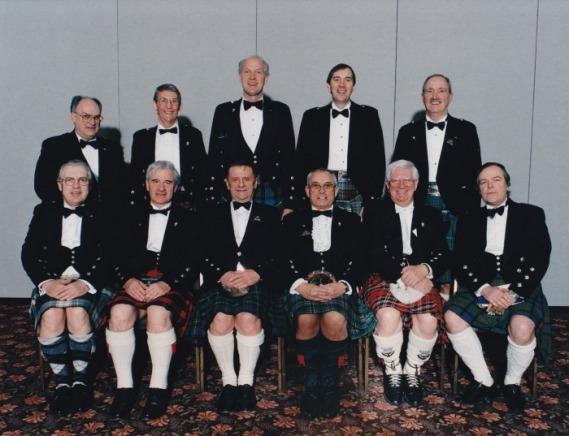 A group of Calgary Burns Club Singers after performing " 'Twas the Scots...." 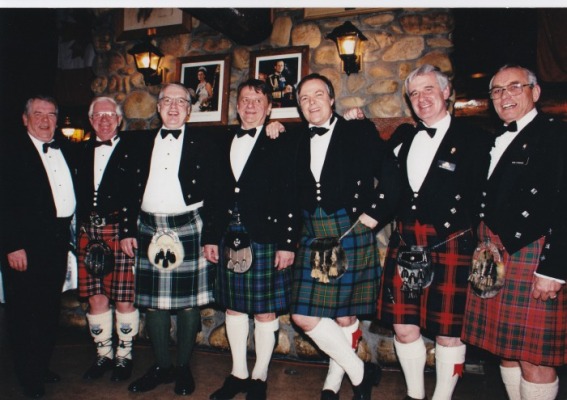 A motley crew of Singers. 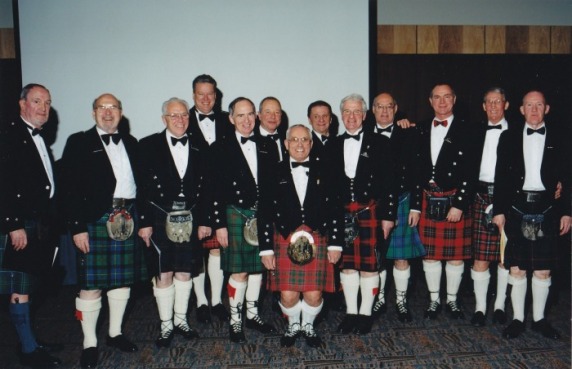 Burns Club Singers posing for a cover shot for their first CD - " 'Twas the Scots".  October, 2000 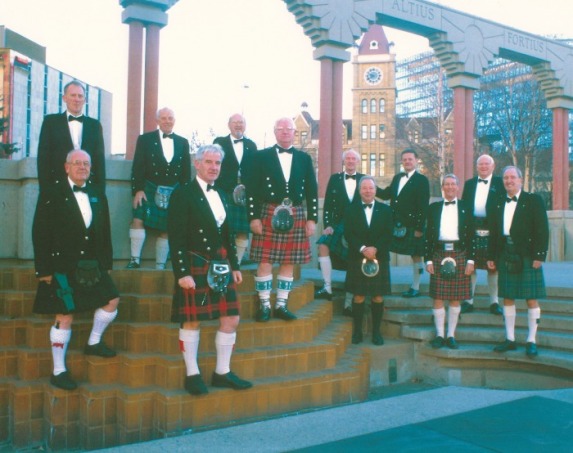 Another pose by the Singers for the cover of " 'Twas the Scots" CD.  Taken on the front steps of Calgary's Old City Hall - October, 2000 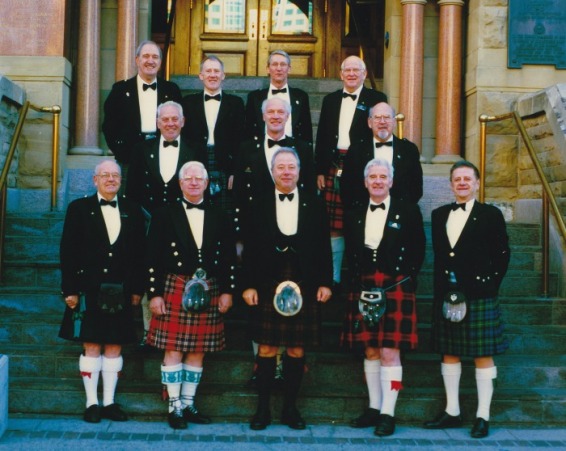 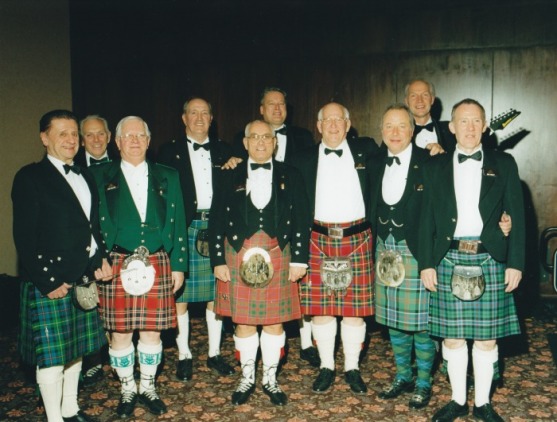 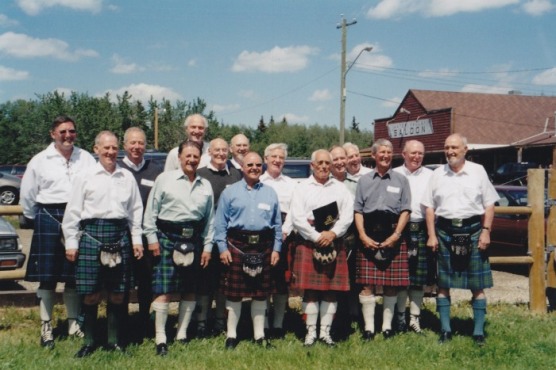 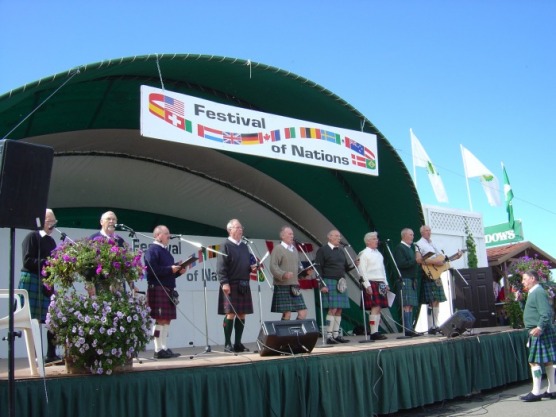 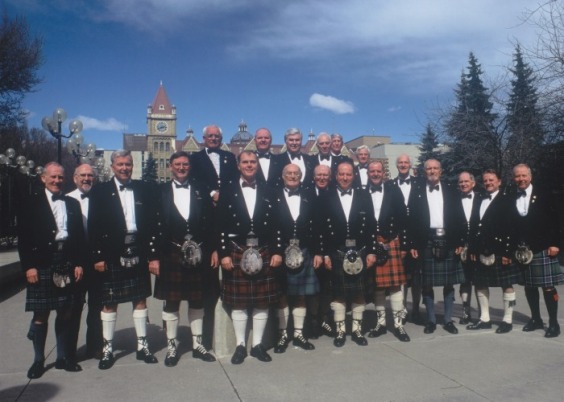 Another pose for the "Bring on the whisky" CD cover 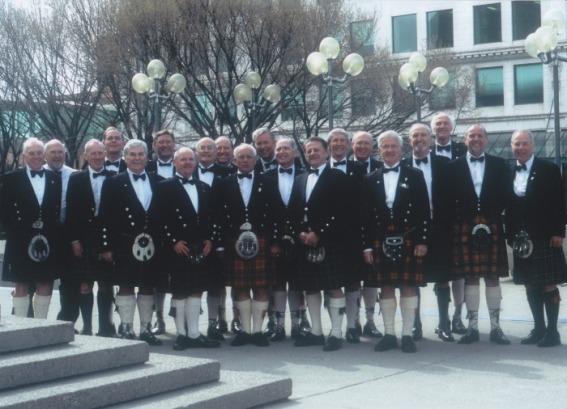